I had flights left over from a failed attempt to twitch the Duncansby Head Moltoni's Warbler a few weeks earlier, so decided to switch them to Bristol–Malaga for a short break in southern Spain instead. A small number of target lifers and Western Pal ticks awaited, and planning was aided mightily by John Cantelo’s excellent online guide to birding Cadiz province and nearby areas – see https://birdingcadizprovince.weebly.com/ – plus additional info from John and from Cliff Smith.

The early morning flight arrived at Malaga airport late and picking up the hire car took ages, so it was 1130 before I started the 200km-plus drive to Vejer de la Frontera. The journey was uneventful other than 2 Monk Parakeets near the airport and occasional Spotless Starlings and Crested Larks. 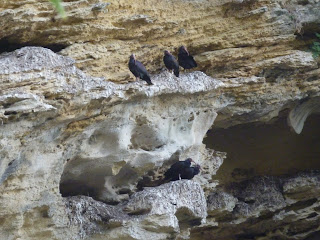 The prime target for today was Northern Bald Ibis (or Waldrapp) at the well-known roadside colony at Barca de Vejer, but when I arrived mid-afternoon, no sign! Presumably they had finished breeding. No sign either in fields between Barbate and Zahara de los Atunes, but plenty of swifts, including several Pallids and at least one Little Swift showing close and well. No swifts, however, near the lighthouse at Atlanterra, just good views of 3 Red-rumped Swallows, a Sardinian Warbler, and 2 or 3 Monarch butterflies. As I drove back out of Atlanterra, thinking that things were not going well, a single small, attenuated swift whizzed across – White-rumped! (I later found out from John that I had been very lucky to connect here, as they are not as regular at this site as they used to be.) I tried the famous Cuevo del Moro at Bolonia in the hope of better views, but no joy; I did, however, add Alpine Swift, 2 Blue Rock Thrushes, and several Griffon Vultures. Back to Barca de Vejer, hoping that the ibises would come in to roost, and there they were – 8 of them! A contender for ugliest bird in the world, but globally rare, and quite bizarre (and wonderful) to see them just above a busy road.

Vejer is a classic Spanish hilltop town – white buildings and a maze of narrow, often one-way streets. The Hostal La Posada (basic but comfortable, and unbeatable value at €25 per night) was easily accessible from the west, however. After checking in it was straight back out again the same way for the short drive north-east to Cantarranas, noting an occupied White Stork nest on the church there as I headed towards the olive groves. I didn’t see Black-winged Kite (normally easy there, apparently, though it was close to dusk and I probably didn't go far enough to be in the best spot), but I got good views of Iberian Green Woodpecker and then, as dusk fell, the main target – Red-necked Nightjar (three flight views, including one virtually overhead, and I heard several others). It turned out to be a good day after all.

A quick look back at Barca de Vejer at 0700 showed only one Waldrapp left on the cliffs, though another was circling. Next stop was Laguna de Medina, about 45 minutes’ drive north. I spent longer than planned here (c. 90 minutes), but it worked out very well, with good views of 4 Western Olivaceous Warblers, and plenty of Reed Warblers (a recent paper assigns Iberian birds to African Reed Warbler rather than European, so technically a Western Pal tick for me). Nightingales, Crested Larks, Sardinian Warblers, and Zitting Cisticolas were singing continually, and a gravelly Great Reed Warbler sang from a reed head, though the calling Stone Curlews remained invisible. From the hide I scoped the wildfowl on the lake, especially the coots, and was rewarded with one that, though distant, had a squared-off shield and red bumps on the crown – Crested Coot! (Again, a bit lucky, as they have been much scarcer at this once nailed-on site in recent years.) Several White-headed Ducks and Black-necked Grebes too, plus a drake Ferruginous Duck, and on the walk back a male Common Waxbill showed well perched on a reed.

It was another hour’s drive north to Los Palacios y Villafranca, and the morning was wearing away when I arrived at Laguna de la Mejorada. The lagoon held lots of herons (including Squacco), single Little and Whiskered Terns, and a very close Red-rumped Swallow. My main target here, though, was Rufous Bush Chat, and I found a pair nest-building in a bush close to the track – sumptuous views, though I didn’t stay long for fear of causing too much disturbance. Besides, the next stop was just west of Los Palacios at the fantastic Brazo del Este, where I ended up spending several hours. It was an extraordinary spectacle, with astonishing numbers of Black-winged Stilts, Glossy Ibises, and Whiskered Terns, various herons (including several Purples and a male Little Bittern), 2 Caspian Terns, several Collared Pratincoles hawking over nearby fields, and many Western Swamphens. Two introduced African weavers have also established populations here, and I got great views of several Black-headed Weavers and a fine male Yellow-crowned Bishop.

Leaving mid-afternoon, I headed south towards Sanlucar de Barrameda via Lebrija. It took ages to find the right way along a maze of gravel tracks and poor tarmac roads, but at last I did it. Relief! It was already 5pm, though, by the time I reached the Bonanza Pools. More brilliantly close views of White-headed Ducks here, but I failed again on Marbled Duck, the last lifer target available. One last site to try, Las Portugueses saltpans, but time was running on and the short drive north through Algaida Pines (itself an interesting site which I had no time to explore) seemed to take forever, not helped by the many speed bumps. At last I got there, only to find the first pool virtually dry! Disaster, or so I thought. Several Gull-billed Terns showed very well by the sluice, but…

A short drive further on, the second pool had much more water, lots of Greater Flamingos, and 20 exquisite Slender-billed Gulls. Almost out of time, I was still determined to enjoy scoping these beauties. Then I noticed a pale duck way over at the back - Marbled Duck! Even better, it had at least a dozen ducklings in tow. Then I noticed another, also with a large brood (14 this time), much closer. At 1900 I dragged myself away, arriving at my overnight stop at Mollina just before 2200. A fantastic day’s birding, celebrated with a cerveza grande or two.

I said goodbye at 0700 to the Hotel Molino de Saydo (highly recommended – great old building, good rooms and food, and very friendly, helpful staff). A short drive later I was at Laguna de Fuente de Piedra – the sheer spectacle of hundreds of Greater Flamingos, Black-winged Stilts, and breeding Gull-billed Terns is worth it in itself, and there were plenty of passerines too (Western Olivaceous Warbler, Nightingale, ‘Iberian’ Yellow Wagtail, Corn Bunting, etc.). The prime target here, though, was Lesser Flamingo, a Western Pal tick for me – regular at this site now, and I knew up to 3 had been seen recently. Two good sets of scope views, possibly of the same bird, in the near corner of the lagoon left of the viewpoint behind the visitor centre, and thankfully no issues with heat haze that early in the morning.

By 0900 it was time to pack up the scope, use the automatic car wash in the nearby village of Humilladero to avoid any extra charges for ‘more than reasonable cleaning’, then drive the hour or so back to Malaga in time for my lunchtime flight. I arrived back at Bristol airport at c.1430, happy with a very successful short trip, including 4 lifers, 8 other Western Pal ticks, and a host of wonderful birding experiences.

Posted by Julian Thomas at 5:13 AM